The Pay the Rent idea has been around for a very long time. You can read a recently written overview of the history here.

In the 1970s, Pay the Rent was endorsed by the National Aboriginal and Islander Health Organisation (NAIHO) – an independent, national, grassroots, representative group. The concept has been implemented in a range of significant ways since that time.

In the 2000s, the Pay the Rent concept was further developed into a scheme which linked it to Treaty. This is encapsulated in a Treaty and Lease written by the late Bejam Kunmanara Jarlow Nunukel Kabool, in conversation with people associated with the post-1972 Aboriginal Embassy. Bejam envisaged that treaties could be made between a range of individuals and entities of various sizes by way of a matrix system, and that Pay the Rent could resource a range of local projects, such as the re-establishment of traditional forms of governance (Sacred Treaty Circles).

The following are links to summaries of some ways Pay the Rent has been implemented. 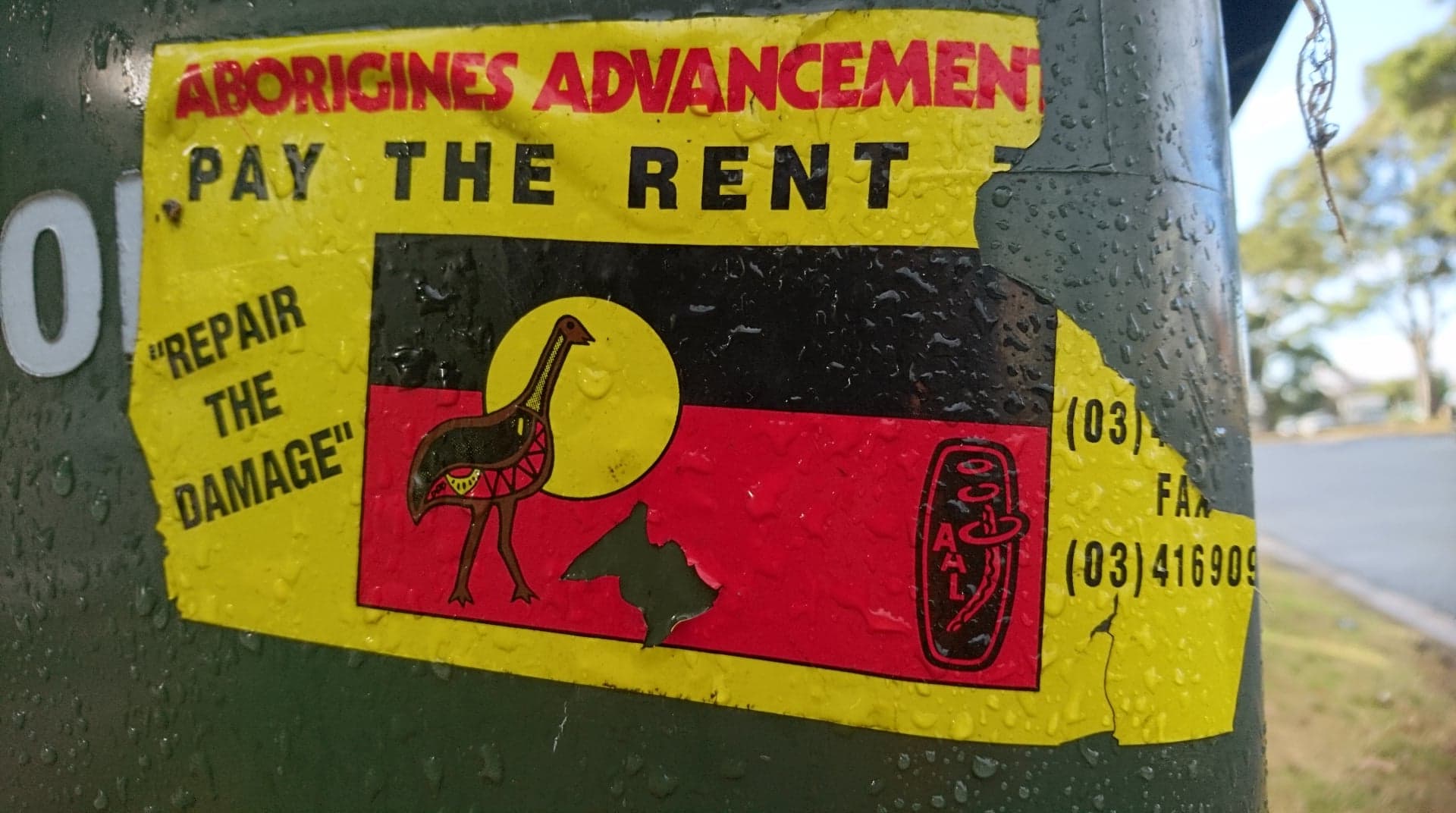 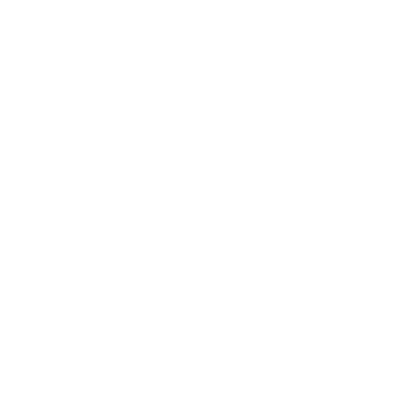 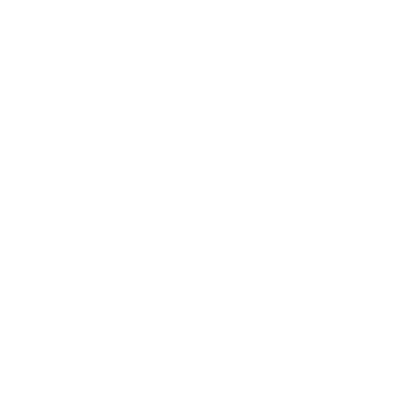 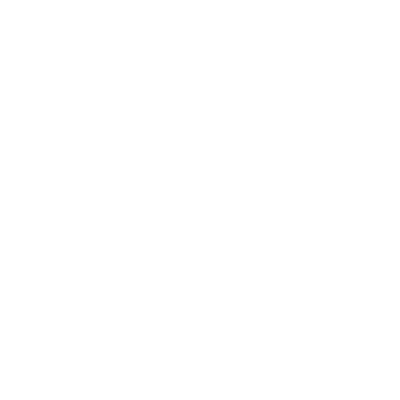 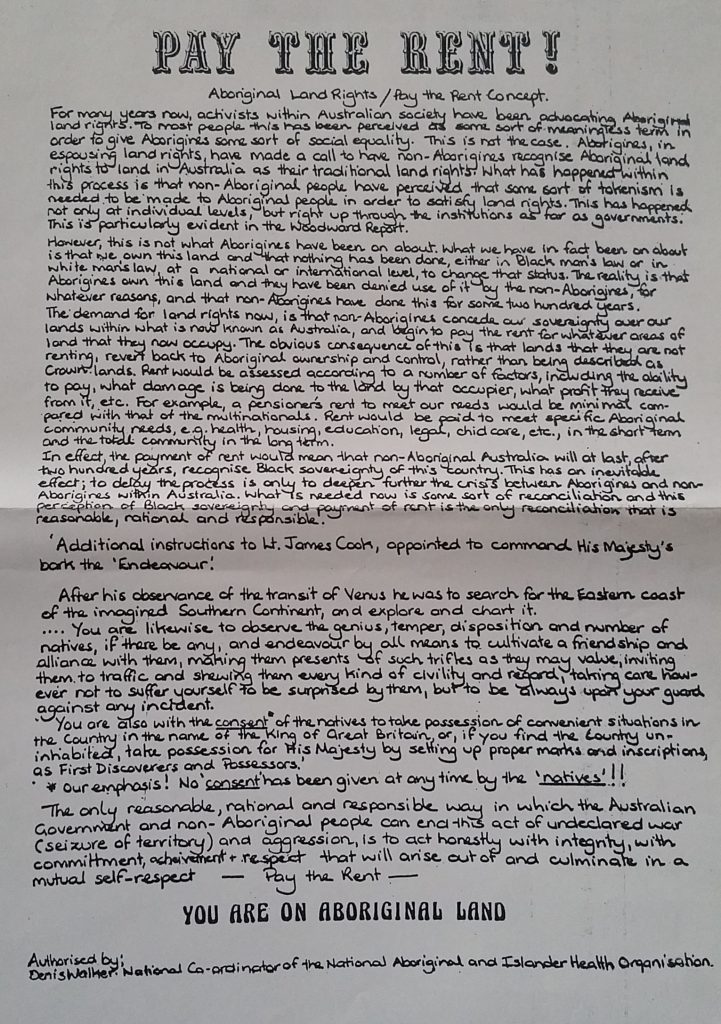 A Pay the Rent scheme operated in Fitzroy during the 1990s. In this scheme, funds were provided to: “Any Aboriginal community service RUN BY ABORIGINAL PEOPLE” and included:

How it worked: The Fitzroy Pay the Rent group received payment from a range of interested non-Aboriginal people; they passed it on to their Aboriginal counterparts, who then utilised and distributed the funds as they saw fit. The Pay the Rent group was able to calculate a running total of how much was being paid by how many people/parties. 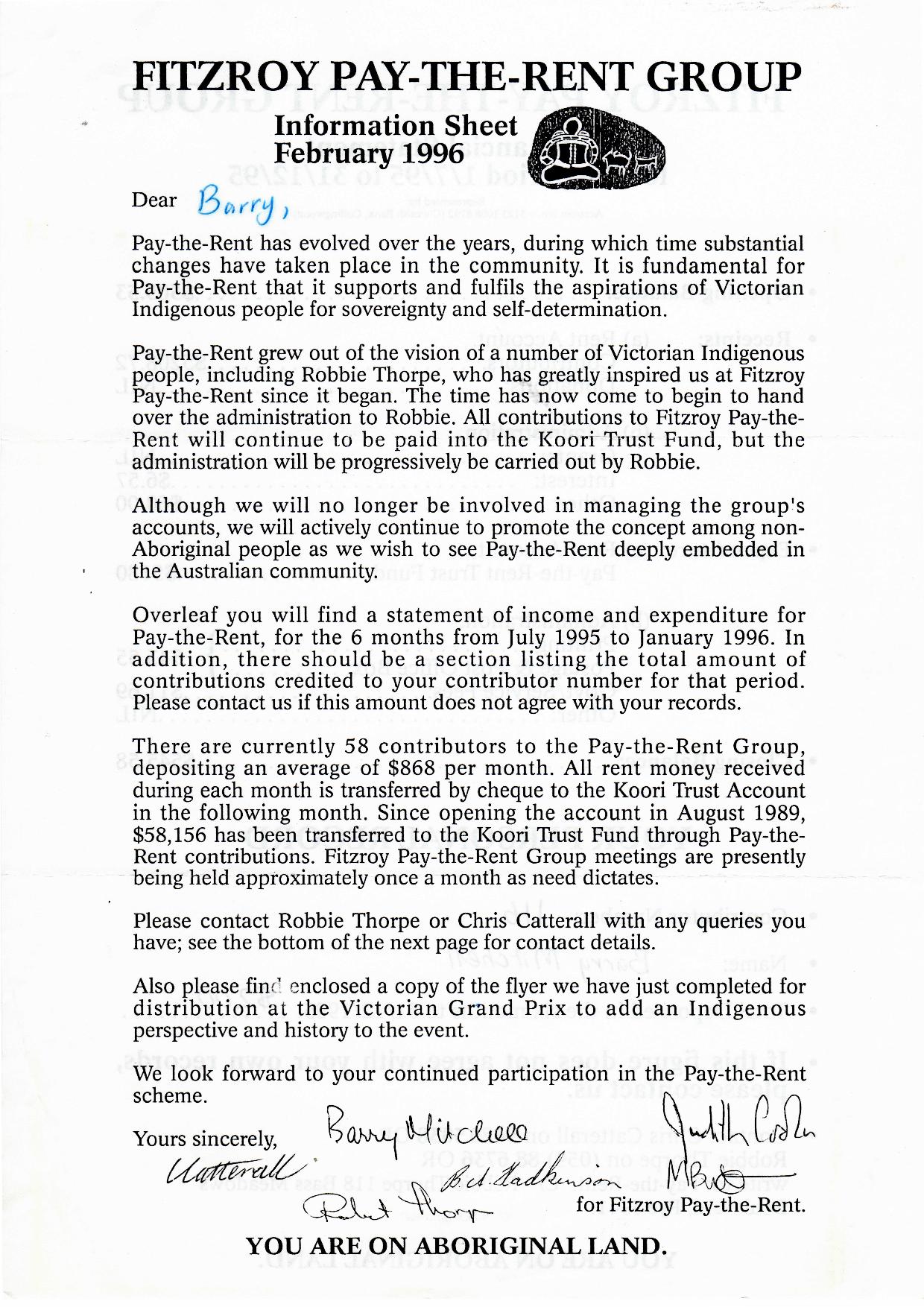 Under the Pay the Rent scheme in Sydney in the 1990s, payment went to “Community-based Aboriginal organisations working in any field of social welfare, for example, health, housing, education, political campaigns, legal, rural projects, children’s services, women, arts and culture.”

How it worked: Action for World Development (AWD) maintained a list of NSW Aboriginal organisations, including names, location, contacts and fields of concern. They were able to send this list out to those interested in pledging to Pay the Rent. People would then choose the organisation they wished to pay from the list provided and would send that organisation a notification sheet, together with their pledge and first payment. They would also notify AWD of their choice so that AWD could send them regular information about the Pay the Rent project and news of how their contributions were being used. 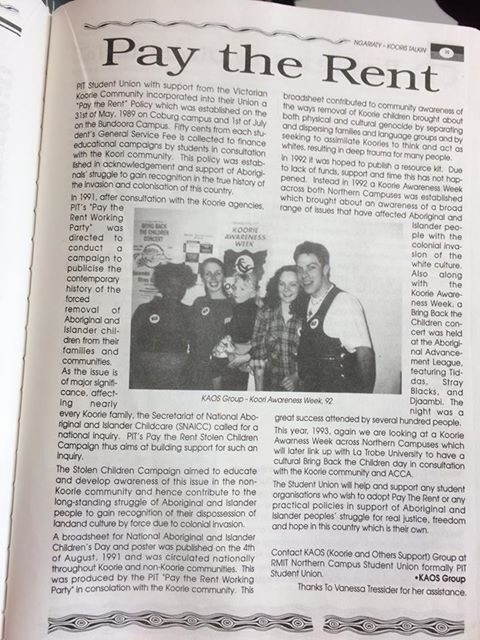 In 2008, Balaangala began developing a native garden at 98 Yoorala St, The Gap, in Brisbane, Queensland. The Group works to creatively bring together Indigenous & non-Indigenous Australians. Its many activities are guided by the local Aboriginal people and grounded in the garden space. Read more.

Balaangala also has an ongoing education process as groups are guided by local Aboriginal people to reflect on matters like treaty, invasion, stolen land, massacres, destruction of culture and how these make an impact at the local level. Learning how non-Indigenous people have benefited and still benefit from colonisation highlights the need to decolonise ourselves. A group ‘commitment to action’ led to the development of a Pay the Rent scheme called the Restoration Fund. This Fund recognises the “rent” that we as a non-Indigenous community owe to First Nation peoples, for living on lands unlawfully taken from them.

The Fund collects contributions from non-Indigenous people. A panel of First Nations people then distributes the funds to First Nations controlled groups from South-East Queensland. Priority is given to groups who cannot obtain government funding & who aim to provide sustainable ongoing projects.

The Fund began receiving rent payments in 2019 after being officially launched by Aunty Flo Watson.
The first distribution of $10,000 was made in 2020; $14,000 in 2021 and $16,000 in 2022. Each group or micro business that have received rent payments are 100% run/owned by First Nations people. For information or to start making contributions to the Fund, email ptrbalaangala2019(at)gmail.com 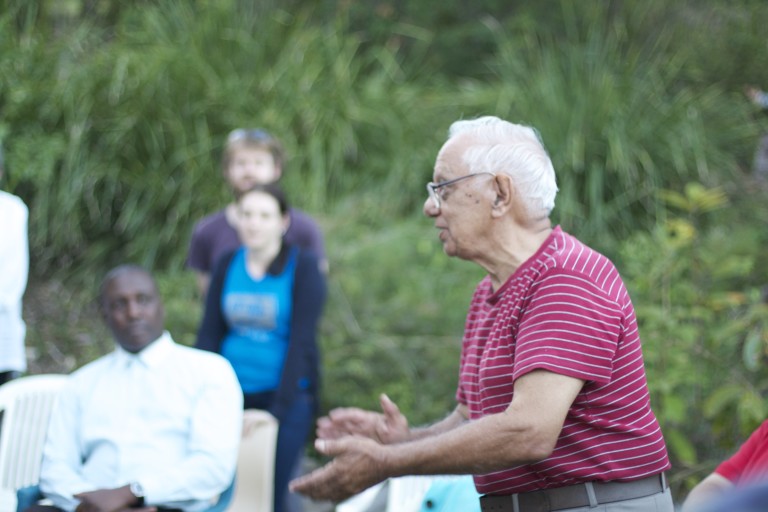 The Australian Jewish Democratic Society discussed the idea of Paying the Rent in the lead up to Invasion Day 2016. They decided to give some money to a couple of local Aboriginal groups as well as encouraging others to do the same.

They wrote a statement about Invasion Day and included a small graphic encouraging people to Pay the Rent. “This Invasion/Survival Day, the AJDS asks that we think about the ways in which we all benefit from colonisation. We encourage active work to support Indigenous sovereignty and Indigenous rights, as well as projects of decolonisation. This Invasion Day, we are paying the rent; will you also pay the rent?”

Whilst not strictly Pay the Rent, the Indigenous Hospitality House (IHH) is founded in the acknowledgement that we live on stolen land and have a responsibility to respond to this. The IHH does this by providing accommodation and hospitality for Aboriginal people visiting family members in hospital. While no money goes to Aboriginal people, the fruits of the Church’s property ownership is shared and made available to Aboriginal people. The IHH also helps bring non-Aboriginal people into the political struggle through their role as hosts at the IHH.

A non-Indigenous person who has educated themselves about Indigenous politics and history became aware of the Pay the Rent concept after volunteering at 3CR. She supported and backed the campaign and paid $35 into the account every month, which is the equivalent of 1 x the supporter’s hourly wage. When the supporter’s salary increased, the amount paid monthly was updated to $100 – 1% of gross income.

A conference or event

An organisation within the lesbian feminist scene goes about Paying the Rent in this way:

“We have a 10 per cent policy whenever we have a camp or conference … Everyone pays a rego fee and then 10 per cent of that is either donated to an Aboriginal organisation (which the organizers choose) or alternatively it goes to cover free entry for any Aboriginal woman who wants to come … It’s basically handed over to Aboriginal women or lesbians to decide where it should be distributed to… The radical lesbian cultural thing is mostly populated by women with not much money, so it is sort of quite a big thing.”

A group of allies came together as a study group to inform themselves about issues centring on ‘Resist, Revive, Decolonise’ that form the manifesto of a recently established First Nations collective. They meet once a month at a different member’s house in turn. The host provided a meal. Those attending brought Pay the Rent money – the suggested amount was $5 per meeting, but people paid more or less depending upon their financial situation. The money collected was paid to a selection of First Nations collectives and Traditional Owner Councils.

When two people bought a house together, they were deeply conscious of buying a house on stolen land – land that had been traded without permission from the Aboriginal owners. They decided to borrow an extra $10,000 and put it into Pay the Rent as a ‘stolen land tax’. They are intending to paint an Aboriginal flag on their front fence, with the words “always was, always will be, Aboriginal land”. They are also Paying The Rent monthly. Their wills provide the opportunity for the land to be returned to Aboriginal people.

Wiradjuri author Anita Heiss’ book Tiddas includes a fictionalised discussion about Pay the Rent. In the extract shown, a married couple who buy a house together consider how they might honour the spirit of Pay the Rent.

Richard is Wiradjuri and Nadine, the main breadwinner, is non-Aboriginal 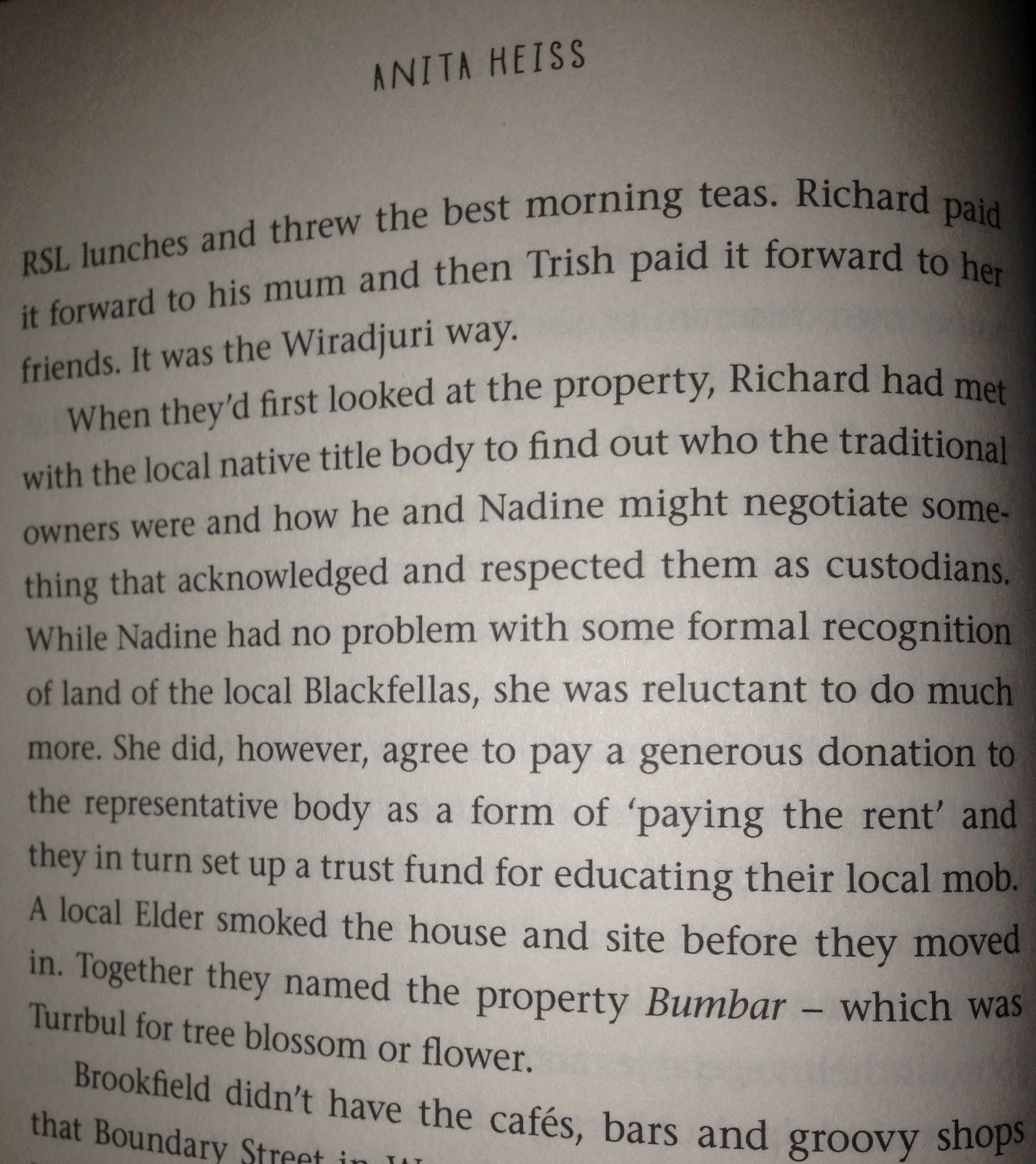